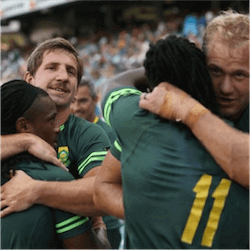 Last week’s Paris Sevens, the penultimate tournament in rugby union’s fast-paced HSBC 2017 World Rugby Sevens Series before the Twickenham finale this weekend, started off with a massive surprise for Australian punters. South Africa’s Blitzboks, the series leaders and winner of half the eight previous Sevens tournaments in the season, suffered a shock 19-12 defeat to a resurgent Scotland in their first pool game.

Neither team then had any trouble dispatching Japan and Canada, but Scotland’s top spot at the end of the pool stages meant they faced Fiji in the quarter-finals, the team currently third on the series’ points ladder. The Scots were on fire, however, and blew the Fijians away 24-0, before repeating the feat with a 19-17 win over England, currently second on the ladder, in the semis.

The South Africans had a somewhat easier route to the final, beating Samoa 12-0, followed by a 26-5 semis win over arch-rivals New Zealand. In Sunday’s final, however, the Blitzboks showed the class that has seen them finish as runners-up or champions in every tournament except Singapore during this World Sevens Series.

Outscoring the Scots by three tries to one to win 15-10, the South Africans wrapped up the tournament, and with it the 2017 World Sevens Series. That outcome was already assured the moment England lost to Scotland, but the Paris Sevens win took the Blitzboks to an unassailable 179 points on the ladder, with England on 145: the first time the South Africans have been series champions since the 2008-9 season.

Even though the 2017 series champions have been decided, the London Sevens at the spiritual home of rugby union this week are by no means a dead rubber. The South Africans will still be hungry for a sixth title in the 2016-17 season, and they also have this year’s amazing record of only eight losses and one draw in 54 matches to defend, so they have to be worth a punt at Twickenham.

But with Fiji sitting on 142 points after Paris, just three points behind England, these two sides will be claiming the attention of most Australian betting fans in London; especially considering that Australia seems firmly stuck in sixth position on the ladder, after finishing 10th in Paris. The championship may have been decided, but the runner-up spot is still up for grabs.