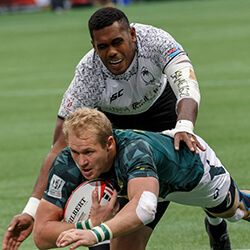 The Springbok Sevens team has claimed bronze after coming in third place at the 2018 World Cup Sevens, which took place at the AT&T Park in San Francisco.

The Blitzboks finished the match with a 23-19 over rivals Fiji, and claimed their second medal in two months, putting another notch in their already successful season.

The team had won at the HSBC World Rugby Sevens Series during June, making it the second consecutive win for the South Africans, adding bronze to their roster of medals. Their lowest placed event so far was at the Commonwealth Games, where the Springboks Sevens finished in fourth place.

Strong performances on the field against Scotland and Ireland saw them move forward until they came across England, where they lost the semi-final of the tournament with a total of 29-7. Despite this, coach Neil Powell told reporters that he and the team were happy that they had achieved a medal, but wished that it had been silver or gold.

Powell went on to state that the most pleasing aspect for him was the team came out strong after their disappointing run against England, overpowering Fiji and ultimately earning a medal. He added that they had lost six times against Fiji in the World Series, and that it took a huge effort from the team to beat them during the World Cup Sevens. He went on to say that although they were always strive for first place, the bronze medal does help.