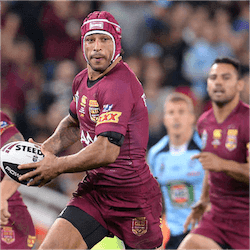 State of Origin Series: Blues One Up

New South Wales’ rugby league fans have every reason to be optimistic about the 2017 State of Origin series. The annual showdown between the NSW Blues and the Queensland Maroons has been called the greatest rivalry in Aussie sport.

However, it does nothing for the southerners’ pride that of the 35 series played to date, the Maroons have won 20. They also got to keep the series shield in 1999 and 2002, the two years in which the tournament was drawn, as they were the previous year’s champions.

In contrast, the Blues have only come out on top in the three-match series 13 times; most recently in 2014, after an eight-year drought. So it will be a great comfort to their fans that in the first match in the 2017 State of Origin series, at Suncorp Stadium on 31 May, NSW delivered a drubbing to Queensland.

Blues’ five-eighth James Maloney was the star of the night, kicking four out of five goals after scoring a try in the sixth minute of play. After the floodgates opened in the 40th minute, NSW’s Mitchell Pearce, James Tedesco, Andrew Fifita and Jarryd Hayne also managed to get over the Maroons’ line, with a single unconverted try from Corey Oates the Queenslanders’ only response.

The final score was 28-4, so the Blues will be pumped up with confidence going into State of Origin II at Sydney’s ANZ Stadium on 21 June.

No doubt Sydney’s sports betting community is hoping for a quick 2-0 series victory for Blues, but the Queensland side is never going to roll over and play dead. Maroons’ coach Kevin Walters is confident he will have two rugby league greats back from injury in time for State of Origin II.

Fullback Billy Slater is already fit again, having played an NRL match against Newcastle, and Walters says he is pretty sure Johnathan Thurston’s shoulder will have healed well enough by 21 June to have the 34-year-old North Queensland playmaker in at five-eighth.

Up-and-coming North Queensland youngster Coen Hess may also be making his State of Origin debut for the Maroons, so punters shouldn’t rule them out of the entire series just yet. If Queensland can win in Sydney and level the series, expect a humdinger of a final in Brisbane on 12 July.