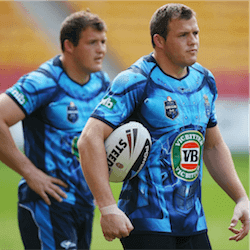 New South Wales Blues fans were expecting a big win when their side took on Queensland Maroons in the second State of Origin match on Wednesday night. After they beat the Maroons a resounding 28-4 in the first match at Suncorp Stadium on 31 May, it was clear that NSW would be the bigger, stronger, faster team at the ANZ Stadium.

The Sydney crowd were confident the Blues could wrap up the three-match series in the second round, giving the Blues their second title since 2005, and only their 14th in the tournament’s 36 editions. At half-time, with NSW 16-10 ahead, it looked like they had succeeded.

Unfortunately for the home crowd, the Maroons fought back with a brand of rugby league that mixed superb strategic intelligence with sheer unstoppable guts: personified by veteran kicker Johnathan Thurston, who delivered sterling service, despite playing most of the match with a busted shoulder.

First Blood to Maroons in First Half

Queensland was the hungrier team from the start, and left winger Valentine Holmes put the Maroons on the board with a try in the ninth minute, converted by Thurston. After being trampled by Blues forward Wade Graham, however, Thurston stayed down for some time, and was then unable to use his right shoulder for the rest of the first half.

The Blues struck back in the 14th minute, when Jarryd Hayne went over and James Maloney converted to level the scores. Ten minutes later, Brett Morris put NSW into the lead with a second try, unconverted. Barely three minutes after that, Mitchell Pearce crossed the line again, and with Maloney putting away a second conversion, it looked like the series was all over bar the shouting.

But when the Queenslanders came out undaunted after half-time, the wheels fell off for the Blues, on defence and attack. NSW simply could not cross Queensland’s line. Dane Gagai scored twice, and Thurston didn’t miss a kick despite his injury. Sadly, he will probably need surgery on that shoulder, but his heroics gave the Maroons a shot at retaining the State of Origin Shield.