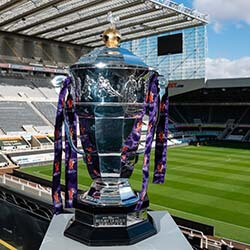 This year’s Rugby League World Cup has officially been postponed until 2022.

The organisers of the event released an official statement on Thursday, confirming that due to the withdrawals of both Australia and New Zealand, the tournament will now only be played next year – some 12 months after it was supposed to have been held.

Organisers initially considered staging the event without Australia and New Zealand, but the final decision emerged to be that of postponing the event to be played in England in 2022 instead – hopefully with the two rugby league juggernauts joining the ride.

Thursday’s statement points a definite finger at the NRL over its reluctance to make available its players for competing in the tournament. Despite the health and safety measures having been fully met in anticipation of an event of this scale, the NRL has refused to release the 400+ players, match officials, and support staff members from the competition in Australia.

According to a survey of players, at least 85 per cent wanted to play in a tournament this year – this despite the decision having been taken out of their hands by their respective rugby governing bodies. World Cup CEO Jon Dutton revealed the result of the survey in Thursday’s statement.

Dutton furthermore explained that the decision to postponed had been the most difficult to make in the six-year history of the competition. He however added that the sport was a resilient one and that next year’s event will be the biggest and best in the history of Rugby League as a sport.