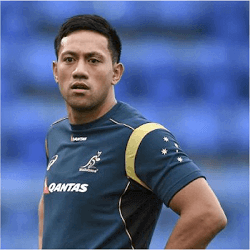 With the year coming to an end, ruby union players have lined up to receive awards for their achievements in 2016.

On the night, it was the ailing Brumbies star, Christian Leali’ifano who scooped up the 2016 Medal of Excellence for his efforts on the field. The Rugby Union Players Association award is considered to be one of Australia’s most prestigious ruby awards with players from all over the country vying for the title.

Christian Leali’ifano, who is currently battling leukaemia was unanimously voted by his peers for the top award. The Medal of Excellence is handed out to players who have shown remarkable leadership, discipline, consistency and sustained performance both on and off the field. Players are voted on performance in both domestic and international ruby season. For many players, the win was not altogether a surprise. In September, Leali’ifano scooped up the Brumbies player of year award after co-captaining his side to the Super Rugby conference honours.

Leali’ifano career has some pretty impressive stats. The dynamic 29-year-old has racked up a total of 117 Super Rugby caps soring more than eight hundred points since joining the Brumbies side in 2007. He is a player dedicated to the sport and the team, missing just 5 minutes of play for the entire Super Rugby campaign. Off the field, Leali’ifano’s achievements are equally as impressive. After completing a certificate IV in New Small Business, the playmaker was instrumental in developing and leading the Brumbies Pasifika development program.

A Hero On and Off the Field

Adding to his accomplishments, Christian Leali’ifano is a “champion” for the local Canberra Domestic Violence Crises Service. He was also awarded the ACT Government Violence Prevention Award for his continued service to the community. At the RUPA awards, he was not able to attend himself but spoke to the crowd via live video feed from Melbourne. After the announcement of the award, Leali’ifano thanked his fellow teammates and paid tribute to all of Australia’s professional rugby players, citing that he was humbled and homered to receive such an award.

Leali’ifano went on to congratulate all the other nominees saying that the award was for everyone who participated in the development and growth of the sport around the country. In the other awards, Reece Hodge picked up the newcomer of the year award while Michael Hopper was named people’s choice Wallaby of the Year. Charlotte Caslick also picked the woman’s rugby sevens player of the year award for the second year in a row.