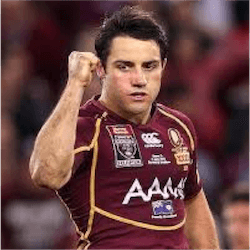 Cronk has stated that he will not be affected by the swirl of emotion surrounding what may be his last Origin series, and that his job during the series decider on remained the same.

He has not made a decision about his future as yet, but, should this Origin game be his last one, he has stated that he would be able to walk away with this head held high, happy with his achievements thus far.

Cooper Cronk will be leaving Melbourne when the season comes to an end, and is set to relocate to Sydney, but the decision of whether or not his NRL career will continue is yet to be made.

Cronk to Keep the Same Attitude and Approach

Cronk had said that the approach he would be taking for Series 3 would be the same one he has had in place for the previous 21 games he has played for Queensland. The Maroons win must have pleased him greatly, and if this was his last State of Origin, it ended on a high note.

He stated that he revelled in the moment that he headed out for an Origin game, particularly at Suncorp. He said the feeling was an indescribably one, but if and when he did retire from the game, it would remain his favourite memory. He spoke of wishing he could bottle it up in order to be able to re-experience it whenever he wanted to.

Playing the Game Passionately and with Care

Cronk said that regardless of whether or not Series 3 game would be his last or not, he would be playing it with the same passion and care that he has brought to all of his games. He spoke of success being found in the internal world, and on the point of focus on and processing of events, and that if retirement was on the cards, it was vital to be able to look back and be proud of one’s behaviour, because you know that you did the best you could.

Cronk spoke of making the mistake at times of trying to see too far into the future, and trying to figure out what it would look like and what the outcome of any given situation may or may not be. he said that he has strived to change this fact, and focus more on short-term goals, limiting his planning to what could be done in the very next session. He said that his approach was far more likely to get him to the long-term goals he dreams of.