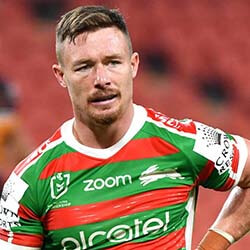 With the Rugby League World Cup set to take place in England later this year, Australia is yet to announce if they will be heading to England to compete. While doubts are still an issue, Damien Cook has mentioned that he would love to join the team in competing should the Kangaroos end up playing.

From 23 October, Great Britain will be home to the World Cup. Unfortunately, player safety concerns have left the ARL questioning if competing is truly in the team’s best interest. Rumours have been circulating that the ARL Commission will more than likely not let the team compete abroad.

While World Cup chief executive Jon Dutton is yet to announce if Australia would be competing, he has mentioned that he hopes the World champions will make it to the tournament.

Cook, who has already had to relocate and leave his family behind, is happy to travel to England to play for his country. Even though this means he will be away from home for quite some time, he says that he would not pass up the opportunity to play in the World Cup. He understands that this decision will be based on what will best benefit and protect the team.

As Cook, and the rest of the world, waits to find out if the Kangaroos will be going to Britain, his focus remains on the Rabbitohs’ lead up to the finals and potential premiership. The team is currently in third position.

The NRL players currently in the Queensland hub have been told that their families are welcome to join them provided they are quarantined beforehand. This news is a major win for players and should see morale and performance improve as a result.