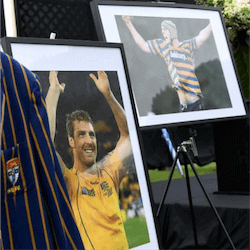 Dan Vickerman, the well-respected and adored former Wallaby, was remembered in a touching eulogy in Sydney, Australia. Multiple famous faces from the Australian rugby world could be seen among the thousand plus crowd, including Vickerman’s wife, Sarah.

In what can only be described as a tragedy that shook the rugby world, Vickerman took his own life at age 37, leaving many devastated. There was only good memories and love at the funeral, however, which took place at the Sydney University Oval’s number one grandstand. Those attending included Phil Waugh and Phil Kearns, previous teammates of Vickerman, as well as current boss of the ARU, Bill Pulver, and respected coach of the Wallabies Michael Cheika.

A Fitting Tribute to a Great Man

Some of the most touching words came from Richard Bell, who had attended school with Vickerman at Bishops, located in Cape Town, South Africa. Having been born in Cape Town, Vickerman had spent much of his life their, prior to moving to Australia and playing as a Wallaby.

Bell recalled how Vickerman had been an astonishing athlete in his Cape Town days, showing remarkable talent in rugby and water polo. But also at getting suspended, Bell added, getting fond laughs from those in attendance.

Friend of Vickerman, and former Sydney University coach Chris Malone went on to call Vickerman a giant of a man, and absolute colossus, who was fiercely loyal, and always delivered on any promises he gave.

The eulogy concluded with ex-team-mate David Lyons calling Vickerman a man who was humble and never blew his own trumpet, and family friend David Marr calling Vickerman’s wife, Sarah, the man’s rock. Marr added that Michael and Xavier, his two children, had been everything in his life.

The members of the NSW Waratahs were not able to attend the Eulogy, having been engaged in a Super Rugby excursion in South Africa, Vickerman’s country of birth. Nick Phipps, who had played with Vickerman in Sidney, made a statement saying that he believed Vickerman would have preferred that they were out playing, as apposed to mourning him. He did say, however, that he and the other Waratahs would remember Vickerman in their own way, in South Africa. This would give them closure before heading into their big games, Phipps concluded.

Vickerman will be missed by many, and his passing will no doubt be seen as a major loss to the game of rugby, both in Australia and the world.