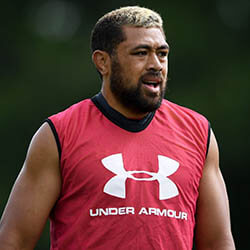 Taulupe Faletau, number eight for Wales has officially been removed from the roster for the Rugby World Cup due to a collarbone injury. The Bath-based player received the injury during training in Wales and will require surgery. The Irish and British Lion injured his arm twice last season and was forced to miss Wales’ Six Nations Grand Slam and has not taken part in a Test since 2018.

A statement released from the Welsh Rugby Union stated that the Wales squad and management wish the player the best with his recovery. Faletau’s bout of injuries first began in October 2018 when he fractured his right forearm playing for Bath, which saw him ruled him out of Wales’ autumn series of games. The 28 year old player was able to make an impressive return to his club for the Champions Cup victory against the Wasps in January – but then broke the same arm, and the injury ensured that he missed what would have been a second Grand Slam, along with a third Six Nations title for his career.

He made a return to the Wales team for their summer camp in Switzerland where he said he was eager to start playing after a frustrating time while remaining out of the game. When fit for action, Faletau is ranked amongst the best back row players in world rugby and has participated in 72 matches for the Wales side since making his debut against the Barbarians in 2011.