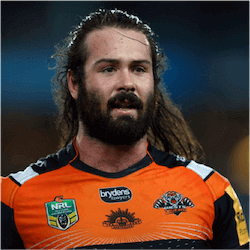 Last Sunday the Wests Tigers won a close match against Canterbury. They were defeated 18 -12, but this was not the main story of the day. The attention was instead focused on the chorus of boos that rang out against Wests Tigers captain, Aaron Woods.

Paul is rumoured to be leaving the Tigers for greener pastures. Nothing has been confirmed regarding the captain’s departure but both he and full back James Tedesco did not meet a resign deadline the Friday before the match with Canterbury.

In response the Tiger officials wrote to club members and requested that they not boo team members who are giving their all for the team, regardless of whether they will be staying or leaving.

The club called fan behaviour disappointing and unfortunate. They said they always welcome passionate fans participation but it should rather be directed at the players in a positive way.

Elijah Taylor, fellow team made of the duo has said that he still has hope that the pair will remain with the Tigers.

He further said that all players know that the Rugby League is a relatively short career. If a player decides to move to another team for more money it is their prerogative.

Many players have families that they want to take care of.

Woods won the man of the match award on Sunday, despite the crowd’s protests. He is one of the sport’s most valuable players.

He has represented Australia on the international stage and also locally with New South Wales.

Whatever his next move is, he will remain a valuable commodity.

He will soon gain many fans and followers due to his fantastic skill and his no nonsense attitude that endears him not just to fans, but to his teammates.