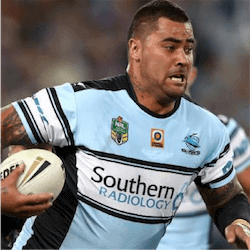 Despite Queensland’s impressive win in Game 2 of the 2017 State of Origin Series that saved them from an early series loss, New South Wales is still the favourite to win the decider at Suncorp Stadium on Wednesday. Betting fans can get odds of around $1.83 on the Blues, while the home side is at $2.14 or more.

As is to be expected when it comes to the fiercest rivalry in Australian sport, State of Origin III is generating plenty of heat and light between players, pundits and rugby league supporters. The big question for Blues fans is whether captain Boyd Cordner’s calf will be sufficiently healed for him to be able to run out on Wednesday night. Whether or not he plays, though, the team has vowed that he will lift the shield if they win in Brisbane.

The Queensland crowd is sure to give an ironic welcome to Blues front-row giant Andrew Fifita. The Man of the Match in the Blues’ imperious 28-4 drubbing of the Maroons in May’s State of Origin I game, Fifita is the player Queenslanders love to hate.

There’s also a personal beef between the Sharks prop and Queensland’s Josh McGuire, following a bout of sledging from the Broncos forward after the Maroons’ State of Origin II comeback win. That’s an argument Blues fans will want to see resolved on the field.

Not to mention that Fifita has a point to prove to a certain pub in Moreton Bay, after an offensive, racist post on social media by a patron took the piss out of his daughter. All in all, he’s sure to be fired up and taking no prisoners on Wednesday. You can get in on the action and place your wagers at Luxbet, and if Fifita has his way, his team will come out on top.

If Cordner is declared fit to play in the decider, it may be thanks to the help of the massage therapist that NSW’s James Tedesco calls ‘the man’: Anthony Carbone. Apart from Cordner’s calf, Blues lock Tyson Frizell also has to get his ribs and ankle sorted out before Wednesday. A combination of massage therapy and an icy mobile cryosauna with temperatures as low as -150C, four times a day, is being used to treat both players’ injuries.