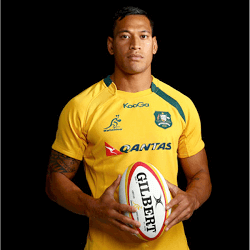 Australian rugby football fans, whether they follow union, league or footie, cannot but know the name Israel Folau: he is, after all, a veteran of all three codes, which is some indication of the depth of his talent. After growing up in Minto, NSW, and later Brisbane, he exploded into the NRL in 2007, at the tender age of 17, with a blinding two seasons for Melbourne Storm. He also achieved a 2008 debut berth with the Kangaroos in the IRL World Cup, helping the national team to the final, where they finished runners-up.

From 2009, he spent another two years in similar form at the Brisbane Broncos: and that, Folau says, is when his life started on a downward spiral. Still only 20, he needed to fit in with the matey behaviour of his teammates. He has recently spoken candidly about the debauched lifestyle of boozing and promiscuity he fell into.

For a child raised with strict values in the Church of Jesus Christ of Latter-Day Saints, emotional conflicts were inevitable. At the start of his career, he had still been contemplating a two-year stint as a Mormon missionary overseas. Now, in his own words, that all “went out the window”, as he succumbed to the temptations of wealth and celebrity; but also to depression.

AFL Stint Took Him to Rock-Bottom

The cycle of self-destructive behaviour and mental health issues may help explain his surprise code-swap signing with the AFL halfway through 2010, but although his stint with the GWS Giants in 2011 and 2012 may have put the team on the map, it was clear he wasn’t thriving in footie. In 2011, he says, he hit his lowest point: and also turned back to his Christian faith.

Since then, he has worshipped with a Tongan Australian Christian Churches congregation; the ACC is a local affiliation of Pentecostal churches allied to the US-based Assemblies of God fellowships. Currently on an evangelical tour of New Zealand, entitled Road To Redemption, with legendary NZ Warriors wing Manu Vatuvei, Folau is determined to help other young people battling destructive behaviour and mental health issues.

His remarkable comeback as a rugby union player in yet another code, going from strength to strength since he joined the Waratahs in 2013 and winning his first Test cap for the Wallabies in June that year, hopefully indicates that he has turned a corner. Folau is happy to admit that he couldn’t have done it without reconnecting to his spiritual roots.