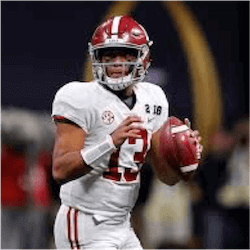 Australian and New Zealand rugby fans have long had a healthy respect for Polynesian players; the Pacific islands have produced some of the top athletes in the sport worldwide. For many years in the US, however, the only sport in which Americans of Polynesian ancestry featured in impressive numbers was wrestling: as evidenced by California-born Dwayne Johnson, whose mum was Samoan.

But Johnson was also a college football player before he switched to wrestling and later acting, and with growing penetration of the sport by Polynesian players of enormous athletic ability, the US college football world is slowly getting used to names they find hard to pronounce.

Most college football fans will have been feverishly practising ‘Tua Tagovailoa’ since the 2018 College Football Playoff National Championship between the Georgia Bulldogs and the Alabama Crimson Tide on Tuesday night.

The Hawaiian rookie, recruited as a sophomore, came off the bench after a season as reserve quarterback and completely turned the game around for the Tide, coming back from trailing by 13 points at half time and steering them to a victory in overtime.

First Half All Georgia’s Way

The Bulldogs started the match at home in Atlanta’s state-of-the-art Mercedes-Benz stadium as the dominant side, putting an unanswered 13 points on the board in the second quarter. At that point, Tide coach Nick Saban decided to pull off QB Jalen Hurts, who had struggled in the first half, despite starting for the Tide as QB in every game this season.

Tagovailoa, his freshman replacement, set up his team’s first touchdown of the game with a six-yard pass to teammate Henry Ruggs less than two minutes into the third quarter, and from that moment the Tide looked reborn.

Trading touchdowns and field goals with the Bulldogs, they fought their way to 20-20 by full time. Although Georgia put over a 51-yard field goal in overtime, Tagovailoa’s final 41-yard pass to DeVonta Smith gave the Tide a final touchdown, and a 26-23 victory. The win brought Alabama their 21st championship.

Next season, it looks highly unlikely that the young Hawaiian star will be starting on the bench…