Frizell Hurt Before State Of Origin 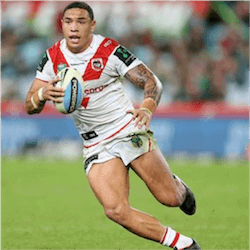 The weekend clash between the West Tigers and St George Illawarra was a very physical one and it may lead to repercussions for the State of Origins this year.

The match ended with the Dragons finishing on top with a 16-12 win over the Tigers, but Tyson Frizell and James Tedesco who both play for New South Wales had very close calls with serious injuries.

Fans were very anxious in the aftermath of the match with the State of Origins already in full swing. Losing these two players even for a few weeks could have had serious repercussions for the team.

James Tedesco got off lightly after Illawara forward Joel Thompson tripped him in the final moments of the game.

The trip did not seem malicious in its execution but it was a big fall for Tedesco who fortunately was not seriously hurt. Thompson has been placed on report since the incident.

Tyson Frizell was not so fortunate however.  The lock for New South Wales injured himself after an attempted tackle on Saturday ending with the player being taken off the field on a stretcher.

With just two and a half weeks to go before the next State of Origin matchup, tensions are running high in the New South Wales squad and with fans.

Frizell really impressed fans in his performances so far but this will be his second rib injury that has taken him out of a game. He is going to go for medical scans Monday the 5th in order to assess the extent of the injury.

If of course Frizell is unable to attend the State of Origin faceoff he will need to be replaced. There are many opinions for who will be put in to replace Frizell.

Many people think that Frizell’s Dragons teammate, Jack De Belin would make the perfect replacement as he was part of the extended squad for New South Wales during their first game.

As the debate goes on, fans are holding thumbs for the recovery of Frizell. They may have to accept that he will be out of the State of Origin matchups anyway as this will be his second rib injury since April and it may be best for him to fully recover from whatever damage has been caused. Both the team and the fans would want what is best for Fizell and the squad in the long run.