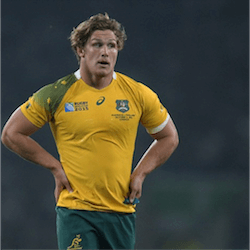 Sixty-eight test veteran Michael Hooper has been named the replacement for Stephen Moore as captain of the Wallabies.  The 25 year old seemed ecstatic about the announcement, saying that it was an immense honour just playing for the Australian side, let alone the honour of captaining the ship.

August 19 will present Hooper with his first important task – leading his mean against New Zealand in Sydney.

Luckily for the Wallabies, Hooper’s leadership strategies seem to be well-defined and completely intact.  Hooper told the press that he wasn’t too bothered about making the team his own, but rather whether he would enjoy high levels of commitment from the individual players who make up the team.

Hooper admitted to feeling a tad intimidated having to manage men who were his senior – men who he had looked up to and admired. He cited this as the reason for not wanting to impress his own specific stamp on the team – but instead, to allow players to bring their own unique style and ethics to the table.

His respectful and approachable temperament no doubt makes up a large part of his success thus far.

The Other End Of The Bargain

Stepping up to the plate as the new Wallabies captain will not be Hooper’s first attempt at being skipper – and sadly, a number of the prior attempts have been quite poor.  The young Aussie seems to struggle to make an impression as a captain – or leader.  A total of 13 players have captained the Wallabies for a total of 15 matches or more.  Of the 13, Hooper has the third worst percentage – having won only 6 out of the 15 tests.

The statistics speak for themselves – and they are pointing directly at Hooper’s inability to captain effectively.  He has been skipper to the Waratahs for the past two seasons – but has managed to achieve a dismal 12 victories from a total of 30 games.

That having been said – let no man deny that Hooper has grown exponentially over the course of the last few years.  Hooper himself marvels at how much better he is equipped now for the task at hand, than couple of years before.

The two vice-captains are yet to be named and will have their work cut out for them.  With the correct measure of support, Hooper may very well grow into the leader that we are all passionately rooting for.