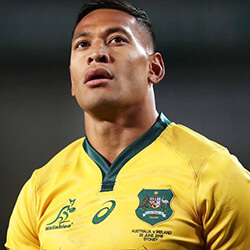 Former Wallaby star Israel Folau chance to get his career back on track playing rugby league for Tonga was hit with a setback after officials backing his plan were suspended over unrelated issues/ Australian Rugby League Commission chairman Peter Beattie has denied the decision to suspend Tonga’s international membership being based on an attempt to block Folau from re-entering the game.

Folau will not be considered by the Mate Ma’a and a host of NRI stars including Jason Taumalolo, Siosiua Taukelaho, and Andrew Fifita will not be abandoning plans to boycott the World nines and upcoming Tests after a meeting of the Rugby League International Federation. The governing body had voted to suspend the Tongan National Rugby League’s membership, and sided with the country’s players and the Pacific Island national government in an otherwise bitter dispute. The RLIF is now expected to appoint an interim board in the upcoming weeks. The Country’s clubs have registered Tonga Ma’a Tonga Rugby League, which now has the backing of the Tonga Sports Council and the nation’s NRL players, and it’s expected to take over administration of the Mate Ma’a

Kristian Woolf, whose dismissal led to 27 different players threatening to refuse to turn out for the Mate Ma’a and calling for the TNRL board to stand down will be reinstated. While the result of the decision from the RLIF is that Folau return to the league be blocked, RLIF deputy chairman Beattie said that it was never the intention.