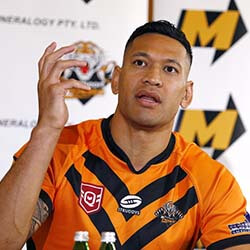 Controversial rugby figure Israel Folau has reportedly called in the help of his legal team to institute action against the Queensland Rugby League (QRL). Folau is claiming that is being discriminated against owing to the fact that he’s not been cleared to join the Southport Tigers – and won’t be until such time as he’s been officially cleared and released by French rugby league club, the Catalans.

The controversial dual international joined the Catalans following his settlement with Rugby Australia. Folau had authored his own contract’s demise when in 2019 he had made several homophobic comments on social media.

The QRL has in the meantime said they’d be willing to allow Folau to play for the Tigers, and only because they’re a community rugby league club. They’ve stressed that they do not agree with the slurs voiced by Folau on social media, and that what’s more, they’ll only give his Tigers-signing the thumbs up once he’s been officially released and cleared by the Catalans.

The French club remains insistent about Folau still being under contract with them, saying they’d only released him for travel to Australia on grounds of compassion.