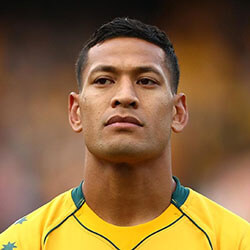 Israel Folau has been signed into a new deal that will see him playing for the Australian Waratahs until the end of 2022 of part of a four-year contract extension made with Rugby Australia, the Wallabies, and NSW Waratahs.

The famous rugby player had originally overlooked the deal some months ago, but both the Waratahs and Rugby Australia had decided to keep the deal from the public until a better time. It’s also believed that Folau’s infamous homophobic comments earlier this year in April had put a delay on negotiations before the deal was then recommitted by both parties.

Folau’s latest deal comes not long after a series of other players re-signed with Rugby Australia for the start of next season. Test captain Michael Hooper, as well as tighthead prop Allan Alaalatoa have also both signed for an extra five years, while Bernard Foley announced that he would be staying with Australia until after next year’s World Cup, which is set to take place in Japan.

Coach Daryl Gibson of the Waratahs has also reportedly been delighted at the news, and told the media that Folau is integral to the plans he has for the squad’s future.

All Blacks player Beauden Barrett has recently confirmed that he’d be open to the idea of an extended sabbatical in Japan as he and other New Zealand players eye more lucrative deals after the World Cup, signalling the potential beginning of a player exodus.