Jordie Barret Out Till The End Of The Year 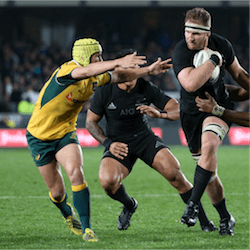 Ruled for the Rest of the Season

It seems Jordie Barret will not be able to play rugby for the rest of the year due to a shoulder injury he picked up during the Super Rugby semi-finals. While it has not been confirmed, the injury would most likely require surgery and almost certainly put him out of the game for the next six months at least.

It is a major blow for the young Hurricanes fullback. Barret played two tests this year. His most significant contribution came in the third test against the British and Irish Lions where he scored a try, topping off an excellent starting performance. Apparently further scans need to be done to determine if the ligaments need to be re-attached in his shoulder. If this is the case, Barret’s next match could be only in January next year.

Speaking to the press, All Blacks assistant coach Ian Foster said that they are waiting on the results. If an operation is needed, he will not be playing for the rest of the year. Foster said that Barret has already had a big year and is too young to play through this type of injury. He added saying it must be pretty frustrating for him as he has already had an amazing six months in the game.

Taking his place in the All Blacks squad will be uncapped Crusaders fullback David Havili. For his part, Havili played an impressive Super Rugby season in the No 15 jersey for the Crusaders. The All Backs are now keen to see what he has to bring to the squad and how well his particular skill set can be used in midfield if the need arises. Assistant coach Ian Foster said that Havili has played in a number of positions and is a reasonably experienced footballer.

The fullback is a position of interest for the All Blacks especially considering Ben Smith will be missing from the first two tests of the Rugby Championship against Australia. It goes without saying that Israel Dagg is ideal for the role but the selectors are keen to keep on the right wing where he is showing a lot of promise. Meanwhile Damian McKenzie is also a good candidate for the position. In all likelihood Havili will be taking the back role as the All Blacks are impressed with his kicking game and defence ability.

Aussie punters will be taking note of his replacements, and if they hoped this would be a blow to the All Blacks in the game played in Sydney, it doesn’t seems as such, but only time will tell.