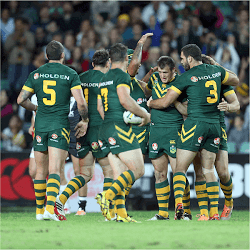 The Australian Kangaroos have done what they set out to do and more. In their opening Four-Nations match against Scotland, the Kangaroos walloped the Braveheart’s 54 points to 12, kicking off their campaign with a bang. A vocal crowd at Hull Stadium greeted the two sides as they arrived on the field. As the match got underway, Australia were given a golden opportunity to score early on. A fumble from Danny Brough set the Kangaroos on the attack with a scrum set just ten meters from the try line.

It was Blake Ferguson who took advantage of the open space on the right side to drift across the field and score the first try. With the Scots still reeling from the first try, captain Cameron Smith faked a kick and shot behind the ruck, fooling the fullbacks to give Cronk the opportunity to place the next try. A few minutes later it was Cronk again who threw a perfect inside ball, putting the Australians on attack for Maloney to do the honours.

No Joy for The Braveheart’s

After just 12 minutes of play, Australia led by 16-0. Scotland failed to create any sort of momentum in the next set as Cronk ran in for his second try. Frizell took advantage of a short side pass by Malone to hand Cronk his 30th test try. Newcomer Moylan was welcomed to Test Football with a well-timed tackle by Liam Hood. The tackle flattened Moylan who took some time to recover, eventually running in points for the Australian side himself.

Scotland finally got some points on the board just before half time when halfback Ryan Brierly scored an inspired try from a looping inside kick by Brough. In the second half, the Kangaroos needed just 3 minutes to add more points to the board when Dugan broke through the pack and raced down the field over 60 meters for another try. Scotland were able to add to their score when a short pass from Adam Walker left the Australian defence bewildered with Ben Kavanagh doing the honours.

The Kangaroos scored again in the 65th minute with Tyson Fizell running in to give his side an unassailable 42-12 point lead. With Scotland under pressure again, Australia sprang to life, giving Michael Morgan the opportunity to score his first Test try. The match ended with Australia on 54 and Scotland on 12.