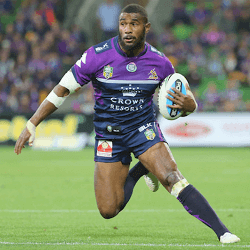 Recent rugby league convert, Marika Koroibete could be playing for the Wallabies before he even gets a chance to play his first Super Rugby match. The talented 24-year-old former NRL player was named as part of the Wallabies spring tour squad. He joins two other uncapped players for the five-test Spring Tour which starts on the 5th of November. Koroibete could be the first player since Tatafu Polota-Nau to make his debut playing for the Australian national side. Polota-Nau debuted for the Wallabies in 2005 before joining Waratahs in 2006.

Before Polota-Nau, Matt Giteau made headlines by playing for the Wallabies in 2002 before making an appearance for the Brumbies in 2003. Koroibete joins the Wallabies as part of an elite team of wings along with Sefa Naivalu and Henry Speight. The dynamic rugby sensation has played a total of 74 NRL matches, scoring an impressive 46 tries. Most recently Koroibete was in action playing in the NRL Grand final with the Melbourne Storm.

Marika Koroibete is one of three uncapped players joining the 32-man squad along with Kyle Godwin and Tolu Latu. Centre Samu Kerevi is out of the squad after undergoing surgery for an ankle injury. The 23-year-old sustained the injury during the match against New Zealand that ending in a defeat of 37-10. Will Genia has also been named as part of the squad but will not be eligible to play outside the November test window. This rules him out of the opening test against Wales and the final test against England.

After being suspended for striking Brodie Retallick in the final test of the Bledisloe Cup, Dean Mumm will miss the opening test match against Wales. He will re-join the squad for the second test against Scotland on the 13th of November. This year, Australia will be aiming to achieve their second Grand Slam in history after last achieving a Grand Slam in 1984. The remarkable achievement saw the Wallabies beating Ireland, England, Wales and Scotland in a clean sweep. The exciting Spring Tour kicks off on the 6th of November when the Wallabies face off against Wales. The team then take on Scotland on the 13th, France on the 20th, Ireland on the 27th and England on the 4th of December.

There’s plenty of action set to take place on the field in the upcoming months and its clear that punters will be keeping a close on eye on both player and team developments going forward.