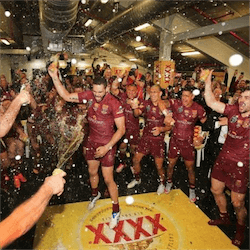 After beating Queensland 28-4 in the first State of Origin game six weeks ago, New South Wales became the favourites to win the NRL series for only the second time since 2005. Even after the Maroons staged an 18-16 comeback from behind in the second half to win State of Origin II last month, the Blues went into Wednesday night’s Suncorp Stadium decider odds-on favourites to take the tournament.

Instead, the Queenslanders ran rampant in front of their home crowd, crowding the visitors out of the game in the first 30 minutes. Despite some sparks from the Blues in the second half, the Maroons finished 22-6 up to win their 11th State of Origin shield in 12 years, and reward punters backing them with $1.20.

NSW were let down on Wednesday by a lack of imagination and an inability to switch up a game plan that wasn’t working. Giant prop Andrew Fifita was punted as the game-changer after his heroics in State of Origin I, and was certainly fired up by Josh McGuire’s sledging after the Blues’ Game 2 loss in Sydney, but he failed to deliver.

In fact, in the final half-hour of the game, it looked like NSW simply gave up. Fifita and Aaron Woods were certainly caught flat-footed in the 67th minute when Queensland’s newest star, Cameron Munster, screamed across for a perfect offload to Jarrod Wallace, who ran in the Maroons’ final try. Following yet another State of Origin failure, the Blues may be looking at a shake-up among both the players and the coaching team.

Queensland, in contrast, will be celebrating another shield and plotting how to continue their State of Origin dominance. Munster had a brilliant game on debut at five-eighth in the opening line-up, and apart from setting up Wallace’s try, he also beat Boyd Cordner and Mitchell Pearce to put Valentine Holmes over the line for his hat-trick in the 60th minute.

Holmes opened his account 15 minutes into the match, then scored again 12 minutes later. Skipper Cameron Smith put both goals over, giving Queensland a 12-0 lead at half-time. Despite a brilliant consolation try from the Blues’ Josh Dugan in the second half, and Smith missing his kick from the touchline after Holmes’ third try, the Maroons’ two scores in the second half were all they needed to wrap it up.

If you didn’t get your bets in for this game don’t despair, there are plenty of other wagering options available online at Luxbet!