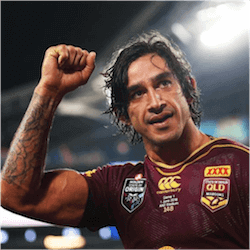 Queensland rugby league fans are celebrating, after the Maroons revived their hopes of winning their 21st State of Origin series with a last-gasp win in Sydney on Wednesday night. After they lost 28-4 to New South Wales in the first match of the three-match series, it was clear that the Queenslanders were facing a faster, stronger, heavier team.

Most Blues fans were expecting their team to steamroller their way to the State of Origin Shield at the ANZ Stadium on Wednesday night, leaving Game III on 12 July a dead rubber. They reckoned without the clever strategic thinking and deep-rooted rugby league skills of the Maroons, as well as the sheer bloody-minded courage of Johnathan Thurston.

Despite leading 16-10 at half-time, the Blues were thoroughly outclassed in the second half, and allowed Queensland to score 12 points unanswered. A final, brilliant kick from Thurston, from way over on the touchline, gave the Maroons an 18-16 victory in the 78th minute.

The Maroons got the first points on the board nine minutes into the game, courtesy of a try by Valentine Holmes and a conversion from Thurston. Later in the first half, though, Thurston got caught under the boots of Wade Graham, and the trampling left him unable to use his right shoulder.

It has since become clear that the veteran North Queensland Cowboys skipper will need surgery on that shoulder, which has been prone to niggles for some time. Nevertheless, despite the fact that the Blues could clearly see the injury and would target it, Thurston played the rest of the match.

The rest of the first half went very much the Blues’ way, as their speed and strength began to tell. Jarryd Hayne, Brett Morris and Mitchell Pearce all scored tries within one 15-minute phase. James Maloney managed to convert two of them, to leave NSW 16-10 up at half-time.

That, however, was the last score they would see. Outplayed by the Maroons for the entire second half, their fatal over-confidence going into State of Origin II was exposed. Dane Gagai went over for Queensland twice, in the 53rd and 77th minutes, and Thurston put both conversions home despite his busted shoulder.

With both sides level again, the final at Suncorp Stadium in three weeks’ time is going to be an epic confrontation and Luxbet is offering great odds to anyone who wants to place a wager.