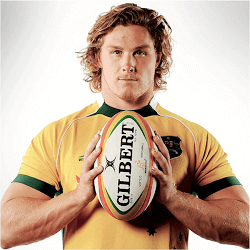 Wallabies star flanker, Michael Hooper has won the John Eales medal, beating out his nearest rival David Pocock by over 100 votes. The dynamic 24-year-old scooped up Australia’s premier rugby award for the second time, joining a distinguished group of two-time winners with his sensational 100 vote victory. He now stands alongside Nathan Sharpe, George Smith and Israel Folau as players who have won the coveted medal twice playing for the Wallabies.

The John Eales medal is awarded to the players who show exceptional playing skills over an 18 test period. Starting with their World Cup match against the USA, each Wallabies player was awarded 3-2-1 votes after each game played. Hooper’s outstanding performance in each test saw him though as the clear winner. Michael Hooper finished with a total of 296 votes, over 100 votes higher than second place David Pocock who received 189. Third place went to Bernard Foley on a 176 votes while Will Genia and Israel Folau made up fourth and fifth place respectively.

Hooper won his first medal in 2013 playing as a rookie. Of the five years that Michael Hooper has been playing for the Wallabies, this was also his fourth straight year that he has won the People’s Choice Award for favourite test player. But despite the praise being thrown his way, the second-time winner was still feeling the sting of a crushing defeat at the hands of the All Blacks in Auckland. When he got on stage, he admitted that he would trade all his solo medals for just one victory song in the Eden Park sheds, a feeling that was echoed throughout the Australian camp.

On the night, other notable awards included the Wallabies rookie of the year award. This was awarded to Dane Haylett-Petty who finished sixth overall in his first year of play. Sean McMahon scooped up the prize for the best Super Rugby Player in Australia while Reece Hodge was named as Super Rugby Rookie of the year. In sevens rugby, Charlotte Caslick was rewarded for her outstanding performance in the rugby sevens side that won an Olympic Gold medal and the World series this year. She claimed the Shawn Mackay award for the best female sevens player. The best male sevens players went to Ed Jenkins for the second time.