No merger for Rebels and Brumbies 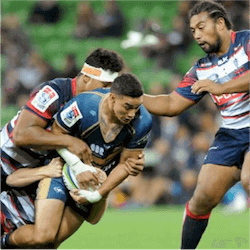 The Australian Rugby Union has rejected rumours that the Rebels and the Brumbies will merge into a single team in order to compete in Super Rugby.

A spokesperson said that there was no change in the view of the Union that the Brumbies should be excluded from Super Rugby discussions in order to reduce the amount of Australian teams that feature in Super Rugby.

Team Solidarity On The Home Front

Another team, the Western Force was also under threat to be removed but they have so far remained with support from the former Wallabies coach, John Connolly.

The owner of the Rebels, Andrew Cox, stated he is very much open to the idea of a merger between the Canberra based Brumbies and the Melbourne based Rebels. He feels that this type of out of the box thinking should be used to help solve this Super Rugby issue.

Many teams have stated that the Australian Rugby Union does not have the legal authority to remove teams from the league. So far two South African teams have also received the chop.

Meanwhile in what seems their last Super Rugby appearance, the Brumbies lost to the Melbourne rebels last week at the AAMI Park Super Rugby match in Melbourne.

The Rebels narrowly defeated the Brumbies, walking away with a narrow 19-17 victory.

The Rebels scored a try within 10 minutes and went on to snatch the victory with a successful conversion and 4 penalties. These points were all thanks to fullback Reece Hodge who had a stellar performance.

The visiting Brumbies had an impressive three tries to make up their score of which only Henry Speight successfully completed one conversion. Flank Jarred Butler was responsible for the three impressive tries of the game.

The Repercussions Of The Cut

The loss may be down to fatigue within the team or simply low spirits after the announcement that the brumbies will be cut from Super Rugby participation.

This is despite the Brumbies sitting at the top of the Australian Conference log.

In comparison the Rebels are at the bottom of the log, so no matter how narrow the victory, when you consider the team’s relative positions, it is quite an impressive feat for the Rebels.

It is now up to the Australian Rugby Union to compile the new fresh face of the Super Rugby League.