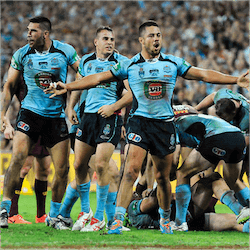 Queensland Crushed At State Of Origin

The New South Wales Blues faced off against the Queensland Maroons at Suncorp Stadium and defeated Queensland 28-4. This was especially striking, as Queensland was the host team.

While they did not wow the crowd with exceptional playing, the team remained focused and methodical, applying pressure until the cracks in Queensland started showing. Highlights came from New South Wales’ James Tedesco, James Maloney, Andrew Fifita and Nathan Peats. The team scored 5 tries to secure their victory.

There were very few errors from the Blues and constant pressure despite the setback of Nathan Peats being sent off after halftime with a thigh injury.

Blues coach, Lawrie Daley, credited the team’s defensive strength with bringing the game home for them.

Mitchell Pearce had a lot to make up for in this game after his 2016 suspension and his poor recent performances.

While he did not play up to his usual standard, he did score a try and despite average kicking, he played with a lot of heart.

Starting With A Bang

Fifita facilitated the first try for the Blues. In only a few minutes into the first half, Fafita made a sprint for a try, breaking the defensive ranks of the Maroons.

Maloney was in close support and easily took Fafita’s pass to plant the ball right between the posts. Maloney made a wonderful conversion to place the Blues in the lead. Oates and Cronk from the Maroons tried to put the pressure on the Blues with Cronk attacking the backline but the determination and the coordination of the Blues could not be brought down.

That said, there were many flaws in the Blues performance during the first half. Fafita powered through the Maroons and received support from the forwards but their push was not always as well oiled as it could have been.

No Recovery For The Maroons

What placed the final damper on the home team’s spirits was the failed conversion from Origins veteran, Cameron Smith.

The try was an impressive one with great teamwork between Cooper Cronk and Oats, but it was not enough to take the Blues to task. The second half showed a directionless Queensland flailing aimlessly in front of their home crowd.

Making his debut at the State of Origins was Anthony Milford, playing five-eighth but the much-lauded player did nothing to improve his team’s performance.

This was an impressive win for the long suffering Blues supporters.