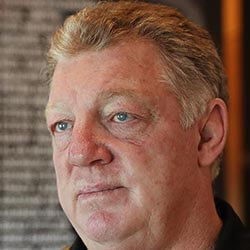 Aussie rugby league veteran and broadcaster Phil Gould has denied all accusations and rumours of his having had something do to with the hindering of Anthony Griffin’s chances of landing a coaching gig with the Dragons. What’s more, Gould now blames the breakdown of a 40-year long friendship with Wayne Beavis (Griffin’s manager) on what he describes to have been a “disgraceful” debacle rife with untruths and empty hearsay.

What seems to have sparked the drama surrounding Griffin’s appointment as Dragons head coach is the fact that Griffin’s contract didn’t exactly enjoy majority support in local media circles. This seems to have led to several assumptions regarding Gould’s possible involvement in a near-smear campaign against the newly appointed Dragons coach.

As for why a supposed misunderstanding should have cost Gould his friendship with Beavis, Gould appears to have been hurt by his former close friend’s so-called “silence” and perceived unwillingness to defend his (Gould’s) honour. So hurt, in fact, that he’s openly accused Beavis of having over long period of time done nothing more than stand idly by as the accusations and “misrepresentations” (regarding Gould) were being flung about.

And even though he’s emphasised himself being well aware of the brutal dynamics often at play in NRL Media, he says the particular nature of the Griffin-war is what’s left him “saddened” and extremely disappointed. But, added Gould, he’s at the same time not at all surprised that News Limited journalists would have been the ones travelling down (this) “particular path”. Said journalists have according to the rugby veteran for the last 25 years been trying to undermine him.