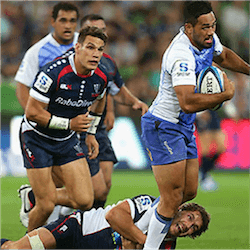 Melbourne fans face a long and painful 20 weeks, if Thursday night’s Super Rugby opener at AAMI Park is anything to go by. The Rebels had a nightmare against the Blues, not helped by an injury bench that included Sean McMahon, Toby Smith, Marika Koroibete, Sefa Naivalu and James Hanson, plus the loss of outside centre Mitch Inman before kick-off.

After the Blues scored first blood with a penalty by Ihaia West five minutes in, the Rebels started out looking strong with captain Nic Stirzaker’s try in the seventh minute, converted by Jackson Garden-Bachop. However, a heavy hit a few minutes later resulted in Stirzaker failing a concussion test, so his rookie-rich team was without their skipper for the rest of the match. The Rebels also lost winger Jonah Placid to a leg injury in the second half.

Blues’ Seven Tries Prove Too Much

The Blues counter-attack opened the floodgates, and despite another try by Garden-Bachop in the 22nd minute, the Auckland side were 25-15 ahead at half-time. The Rebels scored just one more penalty in the second half, while the Blues ran in four more tries for a total of seven, including a hat-trick from rising teen star Rieko Ioane.

The final score was 56-18 to the Blues. It’s a great result for New Zealand fans, but one that will leave many Australians hoping that defending champs the Hurricanes deliver a monumental drubbing to Japan’s Sunwolves in Tokyo on Saturday night, if only so the Rebels don’t end up with the first round’s direst points difference.

Some Epic Clashes This Weekend

This weekend still has plenty of action scheduled in eight more Round 1 matches, with a chance for Australian punters to back a local side in the hopes of a better result on Friday night, when the Reds host the Sharks at the Suncorp Stadium.

On Saturday night, the Brumbies against Super Rugby championship record-holders the Crusaders in Christchurch is set to be an intense affair, as is the South African derby at Newlands in Cape Town, with the Stormers hosting Pretoria arch-rivals the Bulls.