Scotland Bounce Back in Six Nations 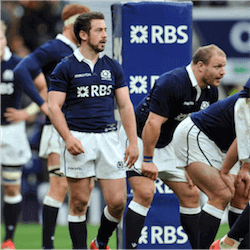 Round 2 of the Six Nations Championship came as a great relief to Scottish rugby fans, as well as the Scotland team. After a humiliating 34-7 trouncing by Wales in Cardiff in the tournament opener, the side was in much better form against France at Murrayfield on Sunday.

Tries by Sean Maitland and Huw Jones delighted the fans, although they were matched by two French tries from Teddy Thomas, both converted by Maxime Machenaud. However, it was the flawless kicking of Greig Laidlaw that put Scotland over the top.

Laidlaw Mainstay of Victory over France

Laidlaw, the 32-year-old Edinburgh local and former Scotland captain, finished Sunday’s match with a perfect place-kicking score. He converted both of Scotland’s tries, but his penalties really made the difference: he slotted six from six.

Even though the French kickers had an equally perfect day, it was Scottish discipline that triumphed, with six successful penalties as opposed to the four conceded to France.

The final result was a 32-26, putting the Scots back into contention and sending the French home with a losing bonus point. Scotland play England and France play Italy in the next round.

Ireland Women Back after French Thumping

In the Women’s Six Nations Championship, Ireland suffered a devastating blow in Round 1. They were thoroughly put to the sword by France in Toulouse, when the French ran in four tries and converted two, with Ireland scoring not a single point.

That 24-0 loss was forgotten on Sunday, however, when Dublin hosted Italy at Donnybrook Park. Claire Molloy’s side did outstanding work to beat Italy 21-8, putting them back in contention in the Top 3 on the ladder.

The win came at a cost, though. Ireland, already depleted by Ciara Cooney’s bad injury in France, also lost wing Alison Miller to a serious leg injury five minutes into the Italy game. Then a shoulder injury later knocked out hooker Cliodhna Moloney.

Ireland may be missing all three in their next match against Wales on February 25. Italy play France on February 24.