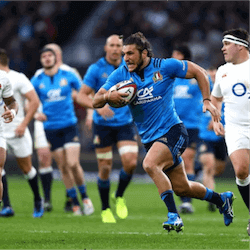 Perpetual Six Nations Championship wooden-spooners Italy might have had a few punters convinced this would be their year, but those betting fans will be getting very long odds on them for the rest of the tournament after their opener against England on Saturday.

The reigning champions ran rampant like a well-oiled machine, outclassing the Italians in every aspect of the game, from technique to strategy to fitness. England ran in seven tries to finish the match 46-15.

Which isn’t to say there weren’t flashes from the Azzurri that showed possibilities; they were simply overpowered by the mastery of England – champions two years in a row and determined to make it three. But Italy could still have the chance to hand that wooden spoon over to Scotland or France.

Alongside France, Wales is always the biggest threat to England’s dominance in the Six Nations, and they started off with a mean show of intent at the Principality Stadium on Saturday against Scotland. Both sides are missing key players to injury right now; in fact, Wales has probably been harder hit than Scotland.

That didn’t stop the Red Dragons breathing fire however, against a seriously below-par Scotland. The 34-7 drubbing secured Wales a bonus point, like England, and the two sides are now top of the ladder, with England ahead on points difference.

The big surprise of the Six Nations opening weekend was Saturday’s Ireland-France game. The usually dominant French have a shaky year behind them, and even playing at home, found themselves trailing the Irish for most of the game.

A try from Teddy Thomas in the 71st minute put France in the lead for the first time, at 13-12, but a superb drop goal from Johnny Sexton in the dying moments of extra time gave Ireland the 15-13 win. They’re going to be fired up for their second-round clash with Italy.

Scotland face France in the next round, with England playing Wales, and both game should see the teams evenly matched and engaged in some thrilling battles to gain an edge.