Springboks Coach On the Line 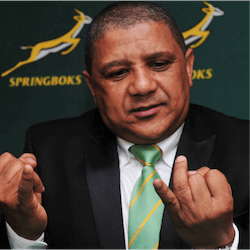 If there’s one thing Australian sports betting fans enjoy almost as much as watching the Wallabies win, it’s watching either the All Blacks or the Springboks lose. So when Saturday dawned with Australia odds-on to beat Argentina in Canberra and South Africa set to play New Zealand in North Harbour Stadium, either way, they knew they had a great day of Rugby Championship action ahead.

New Zealand didn’t disappoint. They haven’t been beaten at home by the South Africans since 2009, when the Springboks claimed the Tri-Nations trophy, and they more than avenged that loss with a spectacular 57-0 drubbing of Allister Coetzee’s woefully outclassed side.

Can Coach Coetzee Keep His Job?

As the scoreline indicates, not only was the Springboks’ defence a shambles, but they couldn’t pull off anything on attack, either. Despite creating a few opportunities, the visitors simply couldn’t penetrate the All Blacks defence, and the result was the biggest winning margin a New Zealand side, or any side, has ever posted against the South Africans.

It’s also one of five losing ‘firsts’ in the record books that coach Coetzee has racked up since taking command of the team just over a year ago. Following the debacle in North Harbour, a number of people in the South African rugby fraternity, including ex-Bok players, have been insisting that the Springboks are unlikely to become major contenders in international rugby again while he’s in charge.

Although the South Africans started gamely, once Rieko Ioane had gone over in the 17th minute and Beauden Barrett slotted the conversion, there was no stopping the Kiwis. They were 31-0 up by half-time, and another four tries in the second half made eight overall, with Nehe Milner-Skudder contributing one in each half. Barrett put away one penalty and seven of his eight conversions successfully to complete the Springboks’ humiliation.

The five-point win leaves New Zealand unchallenged at the top of the 2017 Rugby Championship ladder on 19 points, with two away matches, against Argentina and South Africa, left to play. The Boks are on 11 points, with the Wallabies on 8 and the Pumas on 0.

So while the All Blacks look dead certs to take the trophy yet again, the battle for second place will boil down to whether the Wallabies can beat the Springboks when they meet in Bloemfontein on 30 September.