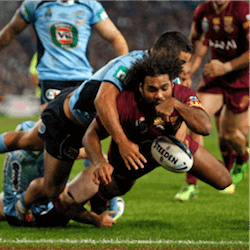 The second match of the three-match State of Origin 2017 series is set for Wednesday night, and Queensland’s rugby league fans are hoping the Maroons can recover from the 28-4 thumping the New South Wales Blues delivered in Brisbane on 31 May, to stay in with a chance of winning the series for the 21st time.

NSW fans, in contrast, are hoping for a repeat performance in State of Origin II at Sydney’s ANZ Stadium, which will wrap up the series and render the final match, set for 12 July back at the Suncorp Stadium, a dead rubber. The Blues have won only 13 State of Origins, with draws in 1999 and 2002 that saw Queensland keep the shield, as they were the defending champions.

Unless State of Origin II on 21 June ends in a draw, only one set of fans will get their wish. Either way, the betting online promises to be highly entertaining. This is, after all, the most intense rivalry Australian sport has to offer.

The Blues last won the State of Origin in 2014, after eight years of unrelenting triumphs by the Maroons. After their convincing win in round one this year, they have kept the team unchanged for State of Origin II. James Maloney, whose prolific scoring helped set up the Brisbane win, is back, as are NSW’s other scorers on the night: James Tedesco, Mitchell Pearce, Andrew Fifita and Jarryd Hayne.

Queensland, on the other hand, has made the most changes to their side in the middle of a State of Origin series ever. Left wing Corey Oates, the only man to score a try for the Maroons in the first match, has been dropped in favour of Valentine Holmes, with Billy Slater, back from injury, starting at fullback. Jarrod Wallace, Gavin Cooper and Tim Glasby are new in Wednesday’s line-up too.

Maroons’ coach Kevin Walters also has rising star Coen Hess on his bench, and legend Johnathan Thurston back at five-eighth. The champion North Queensland playmaker is recovered from his shoulder injury, as he demonstrated in a gruelling match for the Cowboys against the Eels in Darwin’s heat last Saturday.

Thurston is sure to be central to the Maroons’ comeback plans, and the Blues will be making every effort to shut him down fast whenever he touches the ball. Betting enthusiasts can expect some explosive rugby league.