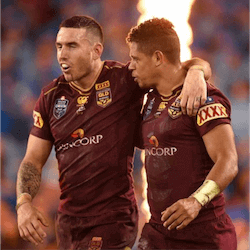 Queensland Maroons fought back from behind to level the series in the second State of Origin match last month, after losing the first game 28-4 to New South Wales Blues in May. The Blues now have to beat them again in Wednesday night’s decider, if they are to raise their series win record to 14 out of 36.

The chances of that happening got a boost on Sunday, when Maroons fullback Billy Slater rolled over his ankle in training. The Melbourne Storm star is a veteran of 28 Origin matches, and Queensland fans were gutted to see him leave training for intensive treatment on a golf cart, with his ankle strapped.

Coach Kevin Walters admitted to reporters that the chances of Slater playing on Wednesday are not great, which could leave Queensland with a problem. With Darius Boyd and Glen Inglis both out with injuries, and winger Corey Oates suffering from an infection, it could be a scramble to find an emergency fullback replacement if Slater doesn’t recover from his injury in time.

Despite concerns about Slater, Walters had every reason to be satisfied with Sunday’s training session. The Maroons’ pack looks ready to stand up to the Blues’ forwards, especially powerhouse prop Andrew Fifita.

They proved it by playing against Maroons’ U20 prop, teenage giant Payne Haas, in the role of ‘Fifita clone’. This gave the Maroons’ front row a chance to rehearse their strategy for closing Fifita down, and the massive 17-year-old a chance to leave spectators babbling about just how phenomenal he promises to be. Punters have also been keeping  a close eye on players performances, and can get their wagers in online at Luxbet if they want to put some money on the game.

NSW have been much luckier than the Maroons on the injury front. Blues skipper Boyd Corder was finally pronounced fit to play after Sunday’s training, clearing up a doubt that has been hovering over the side since State of Origin II.

It looks like the wide range of therapy he has been receiving since then, including sessions with a Sydney energy healer, has produced results. He has recovered from the calf strain he picked up in the second game, so on Wednesday he will lead out the first side since 1996 to play all three Origin games with an unchanged line-up.