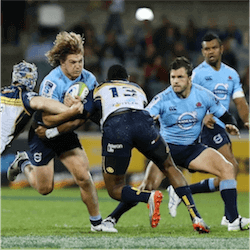 Two weeks in to Super Rugby 2017, and the tournament is not being kind to Australian teams. Even the most patriotic punters might be considering switching allegiances to a side from New Zealand or South Africa, after a disappointing Round 2 for almost all the ARU teams.

Only two Australian sides won Round 1 matches: the Reds beat the Sharks in Brisbane, and the Waratahs beat the Force in Sydney. Round 2 saw a reversal of fortune: the Force came back impressively at home in Perth to beat the Reds 26-19, while the ’Tahs went down to the Lions in Johannesburg 55-36.

The Brumbies and the Rebels, defeated in Round 1 by the Crusaders and the Blues respectively, were the only Australian sides to remain consistent: both lost again in Round 2. A last-second try in Canberra allowed the Sharks to snatch a 27-22 victory over the Brumbies, although the ACT side came away with a second bonus point.

The Rebels remain an early favourite for the 2017 wooden spoon, alongside Japan’s Sunwolves. Both are at the bottom of their Group ladders, after two defeats and not even a bonus point. While the Sunwolves improved on their 67-point deficit against the Hurricanes in Round 1, losing to the Kings by only 37-23 on Saturday, the Rebels have gone from bad to worse.

The Melbourne side suffered a trouncing at the hands of the Blues in the opening match of the tournament, losing 56-18. On Saturday against the Hurricanes in Wellington, they were slaughtered 71-6. On points difference, they now rank even below the Sunwolves.

The Hurricanes, Chiefs and Crusaders are the only New Zealand sides undefeated so far, although despite their second-round defeat, the Blues have the third-best points difference in the Australasian Group. They’re on +23, behind the Chiefs at +24. The Hurricanes are on a stonking +131 already, however, so they have to be the early betting favourites.

In the South African Group, the Lions and Stormers are both 2 in 2, although the Lions have an extra bonus point and so top the Group. The Argentinian Jaguares and South Africa’s Cheetahs and Sharks are still in the running, however, with 1 win in 2. The once-mighty Bulls are languishing at the bottom of the table, after 0 in 2, with only their points difference keeping them ahead of the Sunwolves.