Super Rugby: Brumbies Our Only Hope 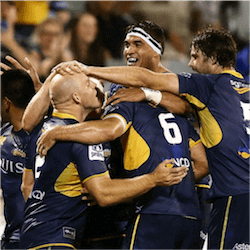 Coming off a Week 6 Super Rugby bye, the ACT Brumbies now have two Australian derbies scheduled in Weeks 7 and 8, against the Reds and the Rebels. These are matches that the Canberra side needs to win convincingly, if they don’t want to be embarrassed in the quarter-finals.

None of the Australian teams are doing well in Super Rugby 2017. The Brumbies are top of the Australian Conference after only two wins from five matches, with just 11 points on the ladder. Compare that to the other conference leaders: the Crusaders on 26 points, the Stormers on 22 and the Lions on 23. The Highlanders are languishing at the bottom of the New Zealand Conference ladder, and even they outstrip the Brumbies with 14 points from three wins in six.

The structure of the 18-team Super Rugby format allows the two conference winners in each group, whatever their standings on the overall points ladder, to automatically go through to the final eight. The rest of the quarter-finalists comprise the third, fourth and fifth-placed teams in the Australasian Group, and the third-placed team in the South African Group, which includes Argentina’s Jaguares and Japan’s Sunwolves.

So as long as the Brumbies hang onto their lead in the Australian Conference, they are guaranteed a place in the final eight. However, it won’t do their pride or their morale any good to go through as the underdogs, especially if several teams that performed better overall are sidelined through a technicality.

Other Teams to Consider a Punt on

There are two matches betting fans may want to pay close attention to this Saturday. The Sharks at home to the Jaguares at King’s Park is important, because a five-pointer from either side will bring them level with the Lions, enjoying a bye this week, at the top of the Africa 2 Conference.

The Stormers, currently undefeated along with the Chiefs and the Crusaders, are way ahead in the Africa 1 Conference, on 22 points. Although the Cape Town team seems set for a quarter-finals berth, this Saturday’s clash against the Chiefs matters, because either side could overtake the Crusaders, also on a bye week, at the top of the tournament ladder. If the Chiefs win, they will take the lead in the New Zealand Conference as well.