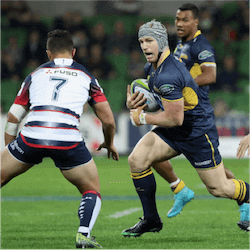 If the ACT Brumbies can win the Australian Conference of the 2017 Super Rugby Championship, they automatically make the quarter-finals in July. With only three wins from seven matches in the first eight weeks of the competition, however, the Canberra side has only 17 points on the ladder. Eight teams from other conferences are currently outstripping them, so the quarter-finals might be as far as they get.

Brumbies fans did not see their prospects improve in Melbourne on Saturday, when the Canberra team gifted the Rebels their first win in 2017 Super Rugby. Four penalties and a conversion from fullback Reece Hodge helped the Melbourne side to a 19-17 victory, with the Rebels leading from the first half.

The Force and the Waratahs both had byes in Week 8, leaving the Reds as the only other Australian side with a chance to advance on the ladder. This they did, with Saturday’s 47-34 victory over the Kings at the Suncorp Stadium.

The win left the Reds on 10 points, but with the Force on 9 and the Waratahs on 8, there is still plenty of time in the pool stages for any of these three sides to haul in the Brumbies and Top the Australian Conference.

Apart from the New Zealand and Australian Conference winners, only three other sides from the Australasian Group go through to the final eight. With the Chiefs, Hurricanes, Highlanders and Blues all competing fiercely with the Crusaders at the top of the New Zealand Conference, it looks like only one Australian side will make the QFs, so the conference top spot is crucial.

After simply obliterating the Sunwolves 50-3 in the Japanese side’s first match at Christchurch’s AMI Stadium on Friday, the Crusaders remain top of the NZ Conference and the tournament overall, with 31 points. They are the last side still undefeated in 2017 Super Rugby.

However, the Chiefs are on 29 and the Hurricanes on 28, after beating the Blues and the Cheetahs respectively, so the Crusaders’ lead is not unassailable. The Highlanders on 18 and the Blues on 17 are also still in the running, so many punters are backing the New Zealand sides to dominate for the remainder of the tournament.