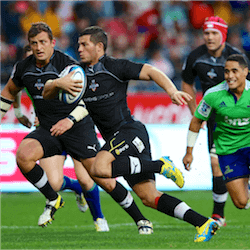 Aussie punters haven’t had a dog in the fight since the Super 18 quarter-finals, but the Lions hosting the Crusaders in the final at Ellis Park this Saturday will entertain rugby union fans everywhere, and it looks too close to call.

The bookies are favouring the Crusaders slightly; they are currently odds-on at most online betting sites, at odds ranging from $0.80 to $0.99.

Crusaders Have the History, Lions the Hunger

On their previous Super Rugby record, the Crusaders have it in the bag. The Canterbury side have won seven titles since the tournament started in 1996, and although the last one was in 2008, they have remained strong contenders, finishing as runners-up in 2011 and 2014.

Add to that the ’Saders 17-0 drubbing of the Highlanders in the 2017 quarter-finals, followed by their impenetrable defence against a travel-weary but still unrelenting Chiefs at Christchurch in last Saturday’s semi, to win 27-13, and they do look good for the win.

However, the Lions finished the rounds-robin stage of this year’s tournament top of the ladder, and with their runner-up finish to the Hurricanes last year their best Super Rugby result to date, they will be hungrier.

The Johannesburg team sneaked through their quarter-final with a last-second penalty that broke the Sharks’ hearts, and from a 12-point deficit to the Hurricanes at half-time in their semi, they roared back to win 44-29. They will also be playing in front of a sold-out Ellis Park crowd, so the South Africans will be a tough nut for the New Zealanders to crack.

Last Super Rugby in this Format

Saturday’s final also brings the short-lived Super 18 era to a close, which might be a relief to Aussie punters. The dismal showing of Australian teams in this year’s competition, in part caused by the awkward pool structure of the enlarged tournament, did not endear the format to rugby union supporters.

The tighter Super 15 set to resume next year will also avoid the controversy of a home quarter-final for a side that finished ninth on the points ladder, which was embarrassing even for Brumbies fans.