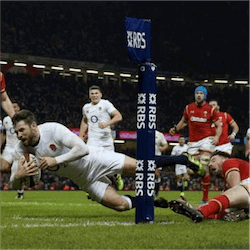 Like some kind of historical metaphor, the Welsh started off the 2018 Six Nations Championship doing fine against other Celts, but the moment they faced the Normans, they crumbled. The Men’s and Women’s Six Nations started off well for Wales, when both teams faced Scotland in the first round.

Wales men delivered a bonus-point 34-7 drubbing, while the score in the Women’s Six Nations opener was much closer. Wales women hung on to grind out an 18-17 victory against a Scotland women side pressing hard at the end, and who at least secured themselves a losing bonus point.

On Saturday, however, both Wales teams played England in the second round, and both had to bend the knee. The men, playing at the main stadium at Twickenham, managed to restrict the English to two tries and a conversion, replying with two penalties, to finish 12-6 down. England men, undefeated in two matches, are vying for top of the tournament ladder with Ireland.

Wales women, on the other hand, got trounced on Twickenham’s Stoop field. England women ran in eight tries, six of them converted, and Wales had no reply at all: the final score was 52-0. England women and France women are now jostling for position at the top of the ladder, with both sides undefeated so far, so their Week 4 match in Grenoble on March 10 could be significant.

Ireland men, like England, started their tournament with a Week 1 win, beating France 15-13. They continued their winning streak on Saturday, handing out a 56-19 thumping to Italy and taking a bonus point, to put them level on 9 with England on the ladder, but two ahead on the points difference.

The Irish started scoring in their 11th minute against Italy, and ran away with the match before halftime, going into the break 28-0. They were 49-0 up before Italy managed to score in the 56th minute, but Italy’s three late tries still couldn’t stop the Irish scoring another.

Usually a formidable Six Nations team, France men have disappointed twice in this season. They narrowly lost their opener to Ireland, and on Saturday went down 32-26 to Scotland, thanks to two late penalties and Gregg Laidlaw’s unerring boot – he kicked 6 out of 6, with 2 perfect conversions as well.