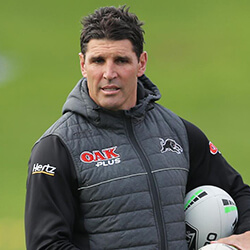 Former Manly head coach and current Panthers-trainer Trent Barrett has been named the new head coach of Canterbury following news of Dean Pay’s departure from the Bulldogs. Barrett, who will continue to assist with coaching the Penrith Panthers before joining the Bulldogs next season, has been signed by Canterbury the next three years.

Barrett only hooked up with Penrith this season, and currently works under head coach Ivan Cleary. Even so, he has been credited with bringing about a great deal of improvement to the Panthers’ attach. The club, under the assistant-leadership of Barrett, now leads the NRL ladder after only 10 rounds.

Barrett has in the meantime expressed his excitement about joining the Bulldogs, describing the club to be a beacon of proud history and long-term rugby league success – and not only that, but also a franchise built on solid foundation of supreme work ethics and irreproachable family values. Barrett added that he now gets to look forward to turning the Bulldogs once again into a rugby league force to be reckoned with.

That the Panthers have lost only a single match so far this entire season is considered one of Barrett’s biggest achievements to date in his career as coach, albeit assistant coach alongside the equally-impressive force that is Cleary. This performance has played a leading role in the Bulldogs’ decision to secure Trent’s services – a task the team says it prioritised in order to bring Barrett home.

Barrett’s vision for the Bulldogs and for player development was what had most impressed the club, said Bulldogs CEO Andrew Hill.