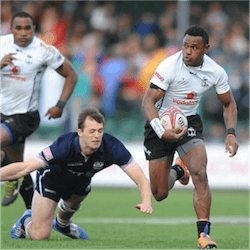 With only two tournaments left in the 2016-17 HSBC World Rugby Sevens Series, Australia’s Sevens fans will have some exciting online betting options this weekend in Paris, and more in the grand finale of the series at Twickenham in London next week.

The upsets in Singapore, the eighth tournament in the series, saw the dominance of South Africa, Fiji and England resoundingly challenged for the first time. Canada triumphed in the final against the USA to become 2017 Singapore Sevens champions, with England managing a third place via a victory over Australia in the play-off.

The mighty Blitzboks were relegated to sixth, after losing to both New Zealand and Australia, and Fiji finished eighth, their lowest place in the 2016-17 season.

Nevertheless, the Singapore surprises couldn’t outweigh the seven earlier rounds in which these fearsome teams dominated proceedings: South Africa remains top of the series ladder with 157 points after four wins and three runners-up medals, followed by Fiji on 132 and England on 130.

European Legs a Chance for England

England closed the gap on Fiji by seven points in Singapore, so they will be hoping to move up the ladder. They are unlikely to top it: that would require England to win the championships both in Paris and at Twickenham, and the Blitzboks to obligingly finish seventh or worse in each tournament as well.

However, second place in the 2016-17 World Sevens Series is up for grabs. England just needs a repeat of the form they displayed against Fiji in Cape Town and Vancouver, which ended in convincing 31-26 and 40-7 wins.

Likewise, Australian betting fans could back their Sevens team to finish higher than their current sixth place on the ladder. New Zealand is fourth with 110 points, followed by the USA on 101. So the Aussies on 94 are technically within striking distance of the number four spot, provided they have two absolute blinders in Paris and London, and New Zealand doesn’t.

Stranger things have happened, and bear in mind that the Australian side was undefeated in Singapore until they fell to the USA in the semis. Along the way, they dispatched Sevens giants South Africa, so there is no reason they can’t repeat and improve on those results in the final two tournaments of the series.