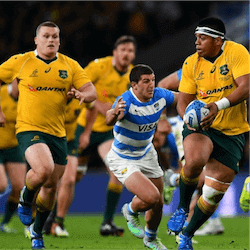 Australian Rugby Sevens fans had two reasons to be excited after the Hong Kong Sevens this past weekend. Firstly, the Australia Sevens side had its best result of the 2016-17 HSBC World Rugby Sevens Series so far, winning all their pool matches and finishing third overall, after being knocked out by Fiji in the semis and beating the USA in the subsequent play-off.

The other reason Aussie punters were chuffed with the Hong Kong results was the fact that they proved once again that South Africa’s Blitzboks are not invincible. In this case, it was Fiji in the giant-killer role, winning the final 19-12.

Cape Town and Vancouver are the only other tournaments the Blitzboks have lost in the 2016-17 season, compared to their wins in Dubai, Wellington, Sydney and Las Vegas. England was their nemesis in Cape Town and Vancouver, and the fact that Australia beat England 12-10 in Hong Kong will also fire up the team and their supporters for the final three legs of the series.

The Singapore Sevens will be played this weekend, followed by the Paris Sevens on 13-14 May. The grand finale of the 2016-17 HSBC World Rugby Sevens Series is the London Sevens, set for 20-21 May at Twickenham, the global heart of rugby union.

Australia in Sixth Place, but Fighting

The win against England and the third place in Hong Kong will be encouraging to Australian punters, but the team needs world-class wins in the final three tournaments, if they are to finish higher on the ladder than their current sixth place.

Despite three losses, South Africa still leads the field on 145 points, with Fiji now second on 122, and England dropping to third on 113. New Zealand remains ensconced at fourth with 97 points, followed by the USA on 82 and Australia on 79.

Three good performance will get the Aussie side safely into fifth place above the USA, but it will take three amazing performances, with Australia finishing as winners or runners-up at least, to challenge any team in the top four.

If betting on the NRL is your preference rather than wagering on the WR Sevens Series, Sportsbet’s NRL Boost promo is valid for the Broncos vs. Titans game. If your BWLW bet wins, the bookmaker will double your winnings up to $50 in bonus bets.