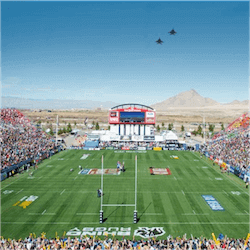 The Las Vegas Sevens, scheduled in the Nevada gambling mecca from March 2-4, 2018, is the halfway mark in the 2017-18 World Rugby Sevens Series – five tournaments down, and five to play. It’s a good point to reflect on the series so far.

After the first four tournaments in Dubai, Cape Town, Sydney and Hamilton, the top five spots on the points ladder were held by South Africa (77), New Zealand (69), Fiji (62), Australia (60) and Argentina (48). England (47) and the USA (36) are the best of the northern-hemisphere teams.

With Argentina doing well but unlikely to threaten the top four, the final six tournaments in the series, starting with the Las Vegas Sevens, are shaping up to be a battle between the three Pacific sides and the Blitzboks.

Defending champions South Africa started off on a high, unbeaten in the Dubai Sevens to lead the ladder from the start, after a 24-12 win against the Kiwis in the final. New Zealand took revenge in the South Africa Sevens semi-final in Cape Town, delivering the Blitzboks’ first defeat of the series by 19-12, with the South Africans then coming back to beat Canada 19-7 for third place.

At the Sydney Sevens, Australia beat the Blitzboks by an impressive 29-0 in the final, and Fiji did the same by 24-17 in the New Zealand Sevens in Hamilton. Going into the Las Vegas Sevens, South Africa had yet to finish a tournament lower than third – and it looks like their only serious competition going forward will be the Pacific big three.

Kenya is the other African team causing a stir in the series. No giants in the full rugby union format, they’re doing surprisingly well in World Rugby Sevens, finishing joint seventh with Scotland in Dubai, 13th in Cape Town, joint seventh with England in Sydney, and sixth in Hamilton.

Along the way, they’ve beaten Canada, Uganda (both twice), Russia, Scotland (twice again), France, Wales and Samoa. They go into the Las Vegas Sevens eighth on the ladder, behind the USA and ahead of Samoa and France.