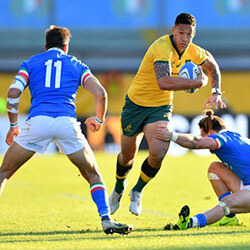 Australia beat Italy 26-7 thanks to Marika Koroibete who scored two tries to land Australia the win. This was amid controversy in Padua over the disallowed scores for the hosts. Despite this, the Wallabies have reduced the pressure on head coach Michael Cheika as the team prepares to take on England in Twickenham.

Koroibete crossed twice within the first five minutes of the game, with Will Genia and Taniela Tupou adding two more not long after the break, allowing their team to claim victory after their last defeat at the hands of Wales in Cardiff.

It was a difficult game for the Australians, however, as Italy held strong against the two-time world champions for the first half an hour, and then losing their cool after learning that Braam Steyn and Tito Tebaldi’s tries being disallowed during the starter 15 minutes.

Italian coach Conor O’Shea told reporters that they were angry; especially due to Tebaldi’s try being taken away, as it would have allowed the team to change the outcome of the game.

The victory for Australia was a much-needed boost after only winning 4 of their last 12 games so far this season. Talking to reporters after the game, Cheika said that he didn’t have anything to note about the referee, but he thought that his team did well considering the situation with the rest of the season. The pressure for the coach has been mounting, and may culminate in their upcoming game against England.