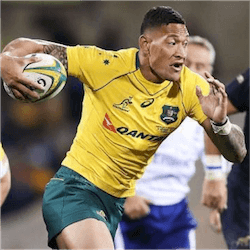 For the opening 40 minutes of the first Australia-Argentina 2017 Rugby Championship clash in Canberra on Saturday, Australian punters with a bet on the visitors at odds of $3.00 or more must have thought they were in for a profitable upset.

Australia, then with only three points, from a draw against South Africa plus a losing-bonus point from one of their two disasters against New Zealand, looked like they might be about to take over the wooden spoon when they headed into the break 13-10.

Argentina, with no points at all after one loss to the All Blacks and two to the Springboks, looked finally on track for a victory. It would have been their first against the Wallabies since 2014, and only their second win ever in Australia.

It was not to be, though. The Wallabies came out of the change room with renewed fire in the second half, scoring six tries as opposed to the Pumas’ two, and eventually winning 45-20. Israel Folau got over the line twice, making him the first Wallabies player to score twice in a match four times in one Test season.

In a first half characterised by what seemed to be a lack of urgency from the Wallabies, Pumas scrumhalf Martin Landajo went over in the 24th minute for the visitors’ first try. Nicolas Sanchez converted, and his two penalties took the total to 13 by half-time, with Australia trailing after a try by Folau, converted by Bernard Foley, who had also slotted one penalty at that stage.

The floodgates opened in the second half, however; with another try from Folau and one by Sekope Kepu. In the final 10 minutes of the match, Argentina’s discipline again got the better of them, and prop Enrique Pieretto was sin-binned for repeated scrum infringements.

The Wallabies capitalised, with tries from halfbacks Will Genia and Nick Phipps, and hooker Jordan Uelese in just his second Test. Foley’s kicking was spot-on in all six conversions to go with his early penalty, and despite another try from Pumas’ centre Matias Moroni in the dying minutes, the Aussies claimed the bonus-point win.

Punters will now be backing the team to beat South Africa in Bloemfontein on 30 September, following the Springboks’ 57-0 humiliation by the All Blacks on Saturday. If the Wallabies win that one, they’ll leapfrog the South Africans into second place in the tournament.