Wallabies Called Out For Fitness 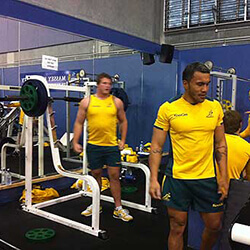 The Wallabies have been having a rough season, and part of the reason for that, according to World Cup-winning coach Bob Dwyer, is that the team is not fit enough, focusing much of the blame on the players themselves rather than the coaches.

The Wallabies have lost six of their last seven games, and were forced to give up the Bledisloe Cup to New Zealand, who have won the title for the 16th consecutive year. The two part Bledisloe Cup saw New Zealand beat Australia 38-13 in Sydney, and then once again in Auckland 40-12.

The string of losses has made many followers direct the blame at head coach Michael Cheika, with many calling for his resignation. But Dwyer, who led the Australian team to the World Cup win in 1991, believes that the players must take the responsibility for their disappointing season.

Dwyer told reporters that he’s certain the players aren’t fit enough, citing that many of the players in Sydney were walking with half-an-hour still left on the block, and that fitness can’t be blamed on the coaching set-up.

Despite what Dwyer has said, coach Cheika has remained adamant that the team’s fitness levels have improved, but Dwyer maintains that many, including himself, were misled about how fit the team really was, but still believes that Cheika is the right man for the job.

Australia is now set to face South Africa in Brisbane during September.