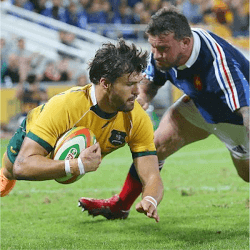 The Wallabies have kept their hopes alive for a Grand Slam after narrowly beating France 25-23 despite not having any of their star players. With massive changes to the starting line-up, the Wallabies were slated in the French press, being called the Australian backup squad. The so-called Australian B-team overcame scrum troubles and fired-up French team to become the first Australian team to beat the French on home soil since 2010.

As the match got underway, the hosts took an early lead when the Australian hooker Tolu Latu played the ball directly off his feet. Machenaud slotted the penalty kick to give France the first points in the game. France continued to apply pressure on the Wallabies eventually resulting in a brilliant try by French winger Vakatawa. The Fiji-born player held possession through multiple phases starting at the home side 22.

Despite being 8-0 down, the Wallabies remained focused and were able to turn it around, starting off with a penalty kick. Sustained pressure on the French pack caused Charles Ollivon to collapse a maul on the try line. The referee has no choice but to award a penalty try which Foley happily converted. Shortly afterwards, Foley extended the Wallabies lead with yet another penalty kick.

French Side Fought Hard for the Win

Shortly before halftime, the Wallabies could not get their scrumming right which lead to a penalty going the way of the French. Machenaud took the three points to close the gap to just 2 points overall. The second half saw Australia shooting out of the blocks with a blistering try from Foley punching through a gap in the French defence.

While France seemed to be physically spent, they still managed to pull off a bit of magic, winning a scrum just five meters from the Wallabies try line. Swinging the ball wide, Doussain took the ball cleanly over the line to bring the game back into reach. The Wallabies quickly hit back with another try courtesy of Kuridrani in the far right corner.

The French team refused to be put out of the game and found a perfect line to the post for another quick try and a conversion by Machenaud. As the time ticked away, France had a chance to steal the match in the last seconds of the game. A strong attack from the French gave Camille Lopez the perfect opportunity for a drop goal attempt that just missed the posts, handing the Wallabies the two-point win.