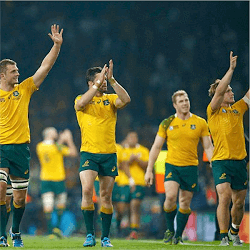 The Wallabies managed to hold onto their dreams of a grand slam when they defeated Scotland by a single point in Edinburgh on Sunday. Going into the match, Australia was confident that could once again pull off a good win against a desperate Scottish side. Within the first five minutes, the entire Murrayfield stadium was on their feet as Scotland got off to a roaring start. After only a few minutes of play, Australia conceded a penalty due to an offside. Things got worse for the Wallabies as Adam Coleman suffered a knee injury and had to limp off the field.

With the star second-rower out of the match, the Scots turned up the heat and pulled of arguably the try of the afternoon from a fumbled high ball attempt from Australia’s Henry Speight. Play started with a small chip from Fin Russell putting the ball into the hands of Huw Jones who rocketed away towards the try line. The inspired try put Scotland ahead at 10-0 after just nine minutes of play. With the Scots firing on all cylinders, Australia responded with a brilliant try orchestrated by Foley who outsmarted the Scottish defence playing a wrap-around with Israel Folau, handing Dane Haylett-Petty the ball who offloaded to Reece Hodge for his second Test try.

A late Break for The Australian Team

In the 23rd minute, Australia drew level with a penalty going their way. Shortly afterwards Scotland pulled ahead again when Hogg claimed his second try after breaking through weak tackles from both Kuridrani and Haylett-Petty. The stadium erupted with all 65,395 fans on their feet cheering on the home side. The rest of the half saw fumbles and mistakes from the Australian side which prevented them from building an attack or creating any sort of momentum.

At the end of the first half, Scotland was leading 17-10. In the second half, David Pocock kept Australia’s hopes alive with a number of crucial tackles and turnovers. The deficit was reduced when Australia received another penalty. In the 48th minute, the Scots struck again crashing over the line while the Wallabies stared on in disbelief. It was Foley’s expert kicking that kept the Australians in the game. Trailing by six points, the Wallabies opted to kick for touch and push for the try. The gamble paid off with Kuridrani scoring another spectacular try and putting Australia ahead by 1 point. Australia then held on for the final 12 minutes crushing the hearts of the brave Scottish team to win the match by 23 points to 22.