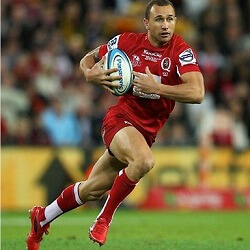 Quade Cooper Back with The Wallabies

New Zealand born rugby playmaker Quade Cooper has signed a three-year contract with the Australian Rugby union and the struggling Queensland Reds. The contract takes the Wallabies five-eight right through up until the end of the 2019 Rugby World Cup in Japan. The twenty-eight-year-old re-joined the Wallabies after completing a season with French club Toulon. He started the season at five-eight in the second Bledisloe Cup test against New Zealand in Wellington.

Speaking at a press conference, Cooper said that for him, playing at the highest level for the Wallabies against the best teams in the world, week in and week out is the ultimate, and will always be his pinnacle sporting moment. He added that the Wallabies have a good opportunity in the coming weeks to put some of the hard work they’ve done into action, and he knows that his teammates are also looking forward to the challenges that lie ahead.

A Boost for the Queensland Reds

Wallabies coach Michael Cheika believes that Cooper will make a big impact for both the Queensland Reds and the national team. Quade Cooper has featured in the Australian starting line up a total of 46 times in his 59 test appearances since his debut in 2008 and is one of the more experienced players on the field. The playmaker also hopes to use his recent international rugby experience to bring an extra dimension to the game. While he admitted to entertaining the idea of joining the Melbourne Rebels, Cooper returns to the Reds, the struggling team he helped win the Super Rugby Championship in 2011.

Quade says he wants to help the struggling Super Rugby Team reach the heights of 2011 again. In speaking about returning to the Reds he said that the team has always been a massive part of  his life. He’s been through the low times and the good times with the Reds, and now he wants to be part of putting them back on top. Cooper will continue to play for the Wallabies, who lost both their opening Ruby Championship matches to New Zealand and are now hoping for better luck in upcoming games.

The Wallabies Next match is against South Africa on the 10th of September in Brisbane. Punters, coaches, players and everyone in the sporting world will be keeping an eye on Cooper as he brings his trademark play to the game.