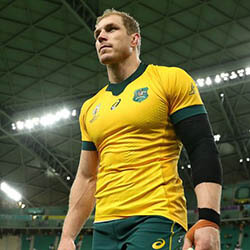 Wallabies star openside flanker David Pocock has called time on his illustrious career. Though only 32, Pocock says the time is right to step away from the game. He has played a total of 83 games for the national side over the past 11 years.

Pocock, who after last year’s Super Rugby season joined and finished the 2019-20 season playing for top-league Japanese club the Panasonic Wild Knights, was set to return to the Japanese team following Australia’s World Cup campaign. He has however chosen to retire instead so as to focus fully on conservation.

But though exiting the professional league season, Pocock said he intended to keep supporting the game locally as well as in Zimbabwe, at grassroots level. Since rugby had afforded him “so many opportunities”, he is now keen to give back to the sport by supporting a new generation of players, Pocock recently told a prominent news publication.

Born in Zimbabwe, Pocock is currently pursuing a masters of sustainable agriculture while working on an agricultural-based community project in his native home country. The aim going forward is to give is undivided attention to his other passion, being that of conservation, explained the star flanker.

In addition to the 83 games played for the Wallabies, Pocock this year became a John Eales medalist. He during his tenure playing for Australia appeared in three World Cups – including that highly memorable 2015 campaign.

He says he now hopes to add value to the incredible young talent in rugby in both Australia and Zimbabwe.